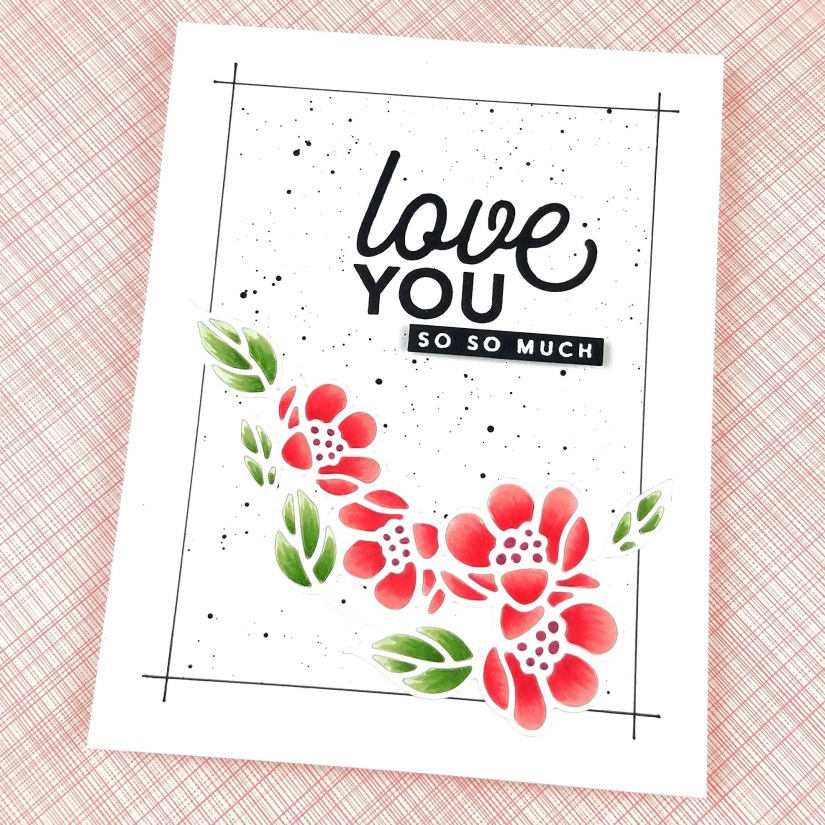 Hi there, I hope you’re having a great day!

Today I pulled out the Flower Cluster Die from Simon Says Stamp to play with.  I had an idea in mind and it didn’t quite go the way I planned but I just hate to give up on a card!

I started by die cutting the Flower Cluster from Neenah Solar White 80# Classic Crest cardstock.  After I pulled the die cutting sandwhich out of my Gemini Junior, I very carefully lifted the top plate hoping that most of the small pieces would stay in the die cut.  I quickly added some paper tape to the back of the die cut, to keep all of the pieces in place, and replaced the few that fell out.

For the background I drew a sketchy frame onto an A2-sized piece of Neenah Solar White.  Then I masked off the outside of the frame and used watered down black gouache to create a splatter on the inside of the frame.  I stamped the Love You sentiment, from Simon Says Stamp’s Love You Like stamp set, in Versafine Clair Nocturne ink.  Then heat embossed the smaller sentiment in white Hero Arts embossing powder onto black cardstock and adhered it to the panel with foam tape.

The idea that didn’t pan out was that I thought it would be easy to replace the die cut (which I had colored over in many places) with a fresh die cut, leaving the colored fallout pieces in place.  But, the paper tape had other ideas.  It was pretty much impossible to remove the die cut without pulling the tape out of shape and moving the fallout pieces every which way.  So instead, I adhered a fresh die cut to the background and the pieced the colored pieces in which took much longer than I was expecting to spend.  Oops!

1 thought on “Love You So So Much”